Steve Borley has recently written an excellent blog post urging us to Think Big Thoughts, a reflection from the recent TLA high school trip to Italy and Greece. It was a privilege for me also to be with our students during the tour, and I have a reflection to share. As I had expected, we walked almost continually among or around ancient ruins of buildings and streets. Previous civilizations in Italy and Greece rose and declined, and gradually new cities and roads were built on top of the old. I knew this from previous study, but I was still astounded at the extent of the ruins which are still being excavated in both countries. For a history major such as myself, it was like a text book come to life! Occasionally, I dropped back behind the group for a few minutes and engaged in some quiet reflection. Now that I am home, the following thoughts have stayed with me, and it speaks to the work we do as educators and parents.

On the first day of the trip we walked through the Roman forum, once spectacular and the central place in Rome for government, commerce, triumphal processions, and public debates. 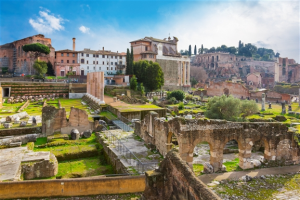 Now it lies in ruins and silence, much of it carried away centuries ago as scavengers took pieces to construct other buildings, or to sell. Western Civilization has roots here, in the early Roman republic, the meeting of the Senate, and the concepts of free speech and individual votes. Still, Rome deteriorated, floundered and finally fell, as had civilizations before and others that would follow. The Forum was where Julius Caesar was assassinated and cremated, our tour guide pointing out the place where those events took place. (Who among us does not remember high school days of wrangling our way through Shakespeare’s most famous work?)

When I think of Julius Caesar, what comes to mind? He excelled as a military leader, was known for brutality in war, the enslavement of the people his armies conquered, participation in political manipulations and murders, and eventual consolidation of power to rule as a dictator. His legacy is not one to be recommended. His internal priorities and values were clear in the way he lived his life.

On the last day of our tour we walked through the ancient site of Corinth, in Greece. This once thriving center of trade with two sea ports was wealthy and influential. Apostle Paul lived, worked, and preached in Corinth, and founded a church there which continued through the centuries as the city suffered invasions, earthquakes, and economic upheavals. The BEMA, where Paul preached, has been excavated and still stands. It is a high, prominent stone platform where public discussions, debates, and trials were held. I took a walk up to the top of the BEMA and found a small carving that had been erected with a quotation from Paul’s writings.

When I think of Paul, what comes to mind? He pursued God with his entire being. He endured adversity of all kinds, yet did not abandon his faith. He invested his energy, money, and time in the places to which he traveled and preached. He did not seek honor or power. Rather, you could say he gave his life away for the benefit of others. His legacy continues into our own time, still influencing and leading others. His internal priorities and values were clear in the way he lived his life.

Two sets of ruins to bookend the tour. Two legacies intertwined in the cities where they lived and had influence. The ruins were a striking reminder to me that nothing material endures forever. Empires collapse; buildings fall into ruin; cities and all their goods end up buried in dust and sediment. It is the values lived out through our lives and the influences we exert upon our families and communities, for ill or for good, that endure. And in our teaching, the most enduring work we do will be in the values were convey to our students through the ways in which we live our lives.

Keep up to date on school events, field trips, and more!